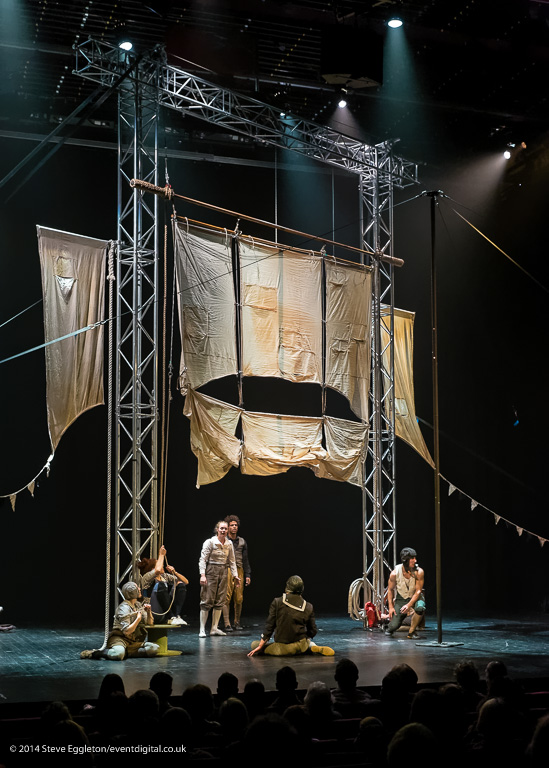 It seems unlikely that when Samuel Taylor Coleridge wrote The Rime of the Ancient Mariner that he would have imagined it could be enhanced by circus skills. On paper this appears to be an uncomfortable mixture — could the moody gothic poem really be done justice with tightropes and juggling? The Square Peg Contemporary Circus clearly had unwavering faith in this combination from the beginning and what gives it utter conviction is their understanding of “circus as an art form”. Tightropes there were indeed and even a brief bit of juggling, but what really remained in the audience’s imagination after the performance was over was the beautiful strangeness of the tale itself.

Almost everything about the performance makes the regular theatre-goer rethink the usual formats (and struggle to describe it!). The Junction Theatre set, for example, was designed to create as much usable vertical space as possible rather than merely inhabiting the horizontal, with a towering metal frame centre stage and floor to ceiling Chinese poles in opposing stage corners. The metal frame was almost as versatile as the actors themselves, being used for tightrope walking, gymnastic bar skills, silk acrobatics and at one point the ancient mariner was swung around the stage from a bell rope at the top.

The huge set space was, almost unbelievably, completely utilised throughout. The actors flipped, danced, balanced, tumbled and at times literally flew through it with physical dynamism and boldness which resulted in the audience’s audible gasps and applause. These physical feats ranged from a three man tower to stomach sickening drops down poles and silks that stopped inches before the ground.

While the play was broken down into circus sets and the occasional solos the plot held it together and the poem itself was never too far away. Thankfully the production kept key parts of the original poetry of Coleridge, including a personal favourite “grey-bearded loon” and the famous and misquoted “water water every where, nor any drop to drink”. Purists would suggest the atmosphere of the language is best left alone, but clearly these purists have never imagined a haunting solo sea shanty sung by someone precariously tightrope walking a thin wooden bar. Music and poetry are much too closely linked to distract and the selection of songs and contemporary music enhanced the moments of physical intensity and eerieness onstage.

Some of these moments were unadulteratedly powerful and one of these combined almost every element of the performance in a tableau. Hege Eriksdatter-Ostefjells climbed a rope to the top of the stage space and with the rope wrapped around her waist, dangled her arms and legs in the position of an unmoving body floating in water. For a moment the audience in the stalls became the sea, looking up at her lifeless body as it slowly swung in the rope. It was an unforgettable image that physicalised the sailor’s deaths and melded the audience into the imagined landscape.

However the most haunting and beautifully strange event onstage was also Coleridge’s; the death of the albatross. After balancing on the wooden bar half way down the metal frame and 2 metres above the stage, Rosamond Martin sang her spine-tingling shanty, donned a white skirt and ‘became’ the albatross. The ship’s crew stared with wonder but the mariner, played by Tomos James approached and the choreography that ensued evoked images of temptation, love, passion and recklessness. It began with circus skills, she stood on his shoulders and he moved around the stage while she slowly moved her arms like wings. After ‘flying’ they danced around the stage, gently at first, then with increasing energy which finally tipped over into Tomos dropping her to the ground for the albatross’ death. It felt as if the mariner and the albatross really did signify something present in shared human experiences and yet it was also appropriately unfamiliar.

It seems that Square Peg certainly converted several audience members to the cause of circus theatre. It sparked questions, in all honesty why do we sometimes feel like circuses are for children? The physical skills on display are outstanding and in the right place these skills can bring words to life in challenging and unique ways. Rime was an evening that somehow made the images in an already memorable story, absolutely unforgettable.

original review can be read here