Salisbury Festival Round Up 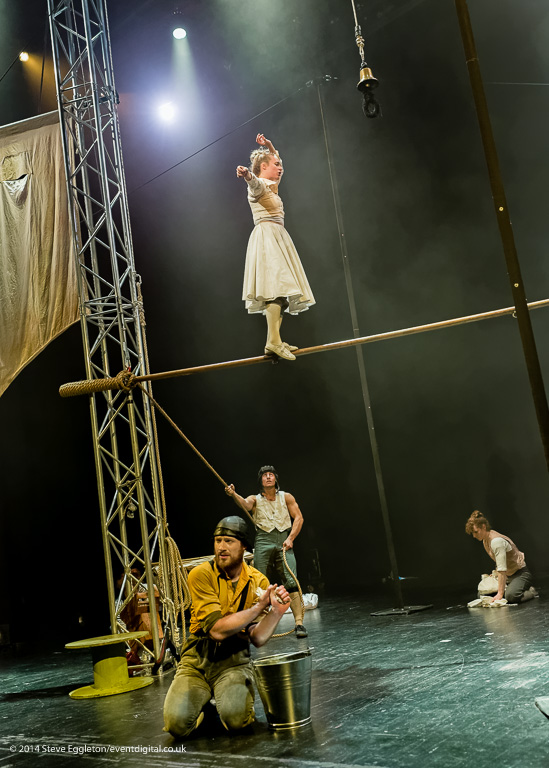 ‘This production was, as a physical spectacle, thrilling. But it was deeply emotional too.’

A few weeks ago Rime performed at Salisbury International Festival. Square Peg were absolutely thrilled to be invited to perform as part of such a high profile festival, following renowned international companies like Circa in previous editions of the festival.

Matthew Stadlen, BBC presenter and journalist came along, reported on his experience and interviewed the cast of Rime.

‘(…) And so followed an hour of exquisitely choreographed dance, human towers, Chinese poles, ropes, flips and flicks.
The first acrobatic move stuttered to a breakdown, but after that the leaps, twirls, lifts and almost heart-stopping plunges were spellbinding. I was at once disbelieving and drawn in by the fusion of storytelling and physical adventure. A sea-washed soundtrack tinkled with the ship’s parts and music that conjured the mystery of the past.
[…]
Acrobat Hege Eriksdatter-Ostefjells climbed a rope and began a routine of twists and body-surging rushes that stretched beyond the frontiers of what one assumes is possible in human form. When she dropped, unannounced, to within barely a metre of the stage, I wasn’t the only one in the audience to voice my anxiety. There is something unexpectedly profound about watching a person and a piece of rope combine to create the unimaginable. As she climbed higher it was as if humanity and divinity almost touched.’

We’d like to thank Matthew for his insightful reading of and response to the show, and we’re hugely delighted to have received such fantastic exposure:

‘ “We’re particularly interested in narrative circus – how can you use circus to enhance and tell a story,” (…) And that’s what they achieved in the poignant bringing together of so many art forms. The muted colours of the costumes and the soundtrack of waves and seagulls combined with a wonderfully crafted set and the words of Coleridge to lift us out of Salisbury and into the dark ocean. The Ancient Mariner lived again.’

A full version of Matthew Stadlen’s article can be read on http://bit.ly/1kdohOa